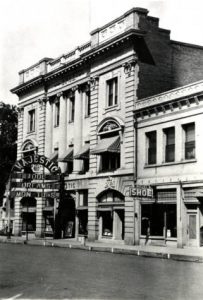 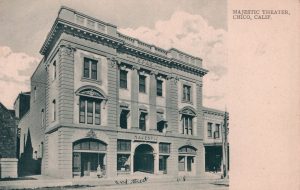 The El Rey Theater has gone by a few names since 1906.
The Majestic Theatre, The National, The American and finally The El Rey. Through it all, it has maintained it’s long tradition as a film screening and civic gathering place.

14 days after it’s opening, on April 23rd 1906, it showed it’s first set of motion pictures, a series called “Whitney’s Celebrated Life Motion Pictures”, that consisted of six or more short films of everyday life and included titles such as “Scenes Of The Russian Revolution”, “Great Mine Disaster”, “The Fire Bug” and “Spanish Bullfight“. It also screened a film of the Chico fire department that would have been produced locally.

This screening date officially makes The El Rey Theater the longest continuously operated movie theater
in California and the 3rd in the entire US.